(Riga, Latvia) I was very honored to be invited to talk at the 2nd Open Fields Conference: Virtualities and Realities at the Latvian Academy of Art as a part of the RIXC Art Science Festival. I was on the same program with luminaries of the digital media culture scene – Monika Fleischmann, Wolfgang Strauss and the wonderful Ellen Pearlman. The work presented here is the continuation of my research into the liquid electric aesthetic and the embeddedness of A.I. and notions of machine learning in contemporary cinema. This acts as both a warning for our ecological future and mirror to our quest for a biotech future-present.

THE 2ND OPEN FIELDS CONFERENCE will discuss the socio-cultural and neurobiological impacts of virtual and augmented reality, and other immersive technologies. The conference participants will also look at the places and movements from a socio-political perspective, the mapping and charting of migrating cultures particularly people and their data traces.

Immersive technologies coupled with superior virtual environments, artificial intelligence algorithms, faster processors, and biometrics are launching a new era in virtual experiences, entertainment and story-telling. At the same time these technologies have the potential for reinforcing stereotypes, contributing to massive economic and social disruptions, and implementing new systems of invasive monitoring and control.   What do these new developments in VR/AR mean for education, entertainment, social policy, and systems of codified knowledge? Like their predecessors the telephone, television, and mobile phone, what are the impending new vistas and reduced horizons? 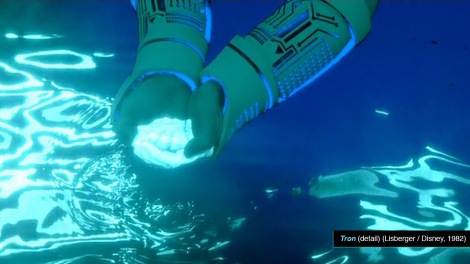 Representations of techno-ecologies have a deep and evocative history embedded as they are within our most elaborate cultural fantasies and our most extreme scientific simulations. These digital media dreamscapes constitute the foundation principles of an emergent data aesthetics of liquid. Hollywood has codified this through an art director’s pallet that is often blue and luminous in tone, is found at the core of a film’s novum and often takes on a kinetic electrical form. It is as if these digital signposts – from Disney’s 1982 film Tron through to more recent ecological parables such as A.I., Gravity and Prometheus – recognize the very gothic anxiety we hold for our environment in the twenty-teens. A ‘liquid modernity’ as it were, bracketed by the twilight years of industrialization and an emergent century of automation and augmentation.

Appearing in all manner of image constructions nature’s liquid electric turn makes its most urgent call via the machine. Indeed, there is a discernible influence of machine vision at work here, and theorists such as Foucault and more presently Paul Virilio and Zygmunt Bauman have noted its ubiquitous rise. This machine presence is also strongly felt in the data visualizations emerging from the ATLAS observer at CERN and in the animations of NASA’s most earnest space dreaming. Here the liquid electric is presented as the source code – the host, the conductor, the origin material – of the human/machine interface. But there is something else at work here too; it is as if this liquid data – this coded luminance – is articulating a symbolic warning. Somewhere amidst these codified realities of remoteness and virtuality these mediated artefacts are reminding us of a great global unravelling.