The following works are a sampling of projects which have been developed in subjects I have coordinated during my tenure as a Media Design lecturer at James Cook University, Townsville, Australia (2008-2013).  Many of the works are derived from cross-disciplinary collaborative production based subjects in the New Media Arts program and represent the collaborative efforts of students working in teams.  Further information on the Media Design discipline of the Bachelor of New Media Arts (BNMA) degree program can be found here.

An introductory video production subject for Media Design students who have had little or no exposure to video production technologies and/or theories.  Students are guided through a carefully designed program which initially encorages them to “play” with video production tools in order to  create non-linear video art sequences.  Towards mid-semester they are required to produce substantial pre-production documentation (storyboards, scripts, production schedules) for a an original concept and then – with mentoring from academic and technical staff – attempt a collaborative narrative/doco/experimental short. (JCU Code: NM3302)

This 3rd year capstone multidisciplinary subject is designed to give students genuine WIL experiences in a collaborative media production environment which results in a professional public outcome.  CXC places students in collaborative teams from the BNMA degree’s 5 discipline streams: Media Design, Photo Imaging, Contemporary Performance, Illustration & Visual Media and Sound & Music Media.  This is complemented with students from outside the School of Creative Arts who take the subject as a final semester elective, these include students from Marketing, Business, Education and IT.

In the first four weeks of the semester students are required to produce professional Industry Pitch documentation clearly articulating the project’s aims and detailing the methodology that will be used to realise specific outcomes.  The Pre-Production Documentation should also give a feel for the project team and the skills and resources that will be used in the project’s development, in most cases corporate branding of a client, the project team or the event is also included. (JCU Code: NM3104)

CXC is based on industry expectations and strives to model its assessment design on practical milestones that reflect production methodologies from a variety of industry sectors.  At each of these key milestones during the semester students are assessed and provided detailed feedback from industry representatives from each of the major media arts disciplines. Featured below are a sample of outcomes which lend themselves to visual display – such as short film, documentary and projection mapping. Other CXC examples include websites, iPad applications, games, client branding and artist representation and performance management. (JCU Code: NM3104)

Student feedback: “The hands on experience. It was great to experience the ‘actual’ feel of what it feels like organise and create a project like The Consequence. Unlike other subjects, it is not just about writing an essay or sitting an exam, it shows you what it would be like to enter the real world.”- Rebecca Hall

The important aesthetic and production issues underpinning the use of typography in still and dynamic media are explored in this subject. An array of advanced software applications are employed to visualise information using text. Students explore spatial relationships with text, colour and shape in a variety of output formats. The subject culminates in a team based project which utilises the theoretical constructs of typographic design and the application of motion graphics and 3D space. (JCU Code: NM2402)

Each Creative Exchange project requires the project team to organise a public launch event for their project outcome.  Depending on the type of project this may be a handover to a client, a performance, an exhibition, screening or project testing environment.  These are designed to be professionally managed events which signal the transition from student to professional practitioner and students are mentored on how to market their event and manage their public image across traditional and social media environments.

The following represent a sample of images produced by the students to document their project launches (2010-2012).  Additional photography by Elly Murrell, Chanel Baran and Sarah Welch. 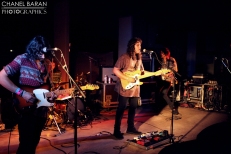